It seems that Unified Patent’s year plus PR campaign (see) against HEVC assets in the US has run out of steam. While their COO’s incoherent rants about Velos Media may be amusing, as I detailed earlier the campaign was misguided and rife with factual errors.

Velos, whose members include BlackBerry, Ericsson, Panasonic, Qualcomm, Sharp, and Sony, has the right to license well over five thousand HEVC patents.  These six companies invested significant R&D into developing the HEVC standard. According to the Velos website, their collective technical contributions account for around 40% of the mandatory and optional features of the standard. Technical contributions are a widely accepted indicator of patent quality (3.6), and a strong indicator of underlying research and development, which in turn has been correlated to positive economic growth and quality patents (e.g.). Surely a single forum to license such a substantial portion of the technology would be a good thing and “should be encouraged” (p8) because it can save licensees hundreds of millions of dollars in transaction costs.  But seemingly not, according to Unified.

Unified’s very public campaign to discredit Velos Media begs the question, “Why”? Velos Media is one of three pools for HEVC patents, alongside MPEG LA (which includes Apple, Canon, and JVC Kenwood Corp) and HEVC Advance (including Dolby Labs, GE, Mitsubishi Electric Corp., Samsung Electronics, and Warner Bros. Entertainment) Unlike those pools, Velos Media owns many patents outright (with over 40 assignment records in the US at last count).  Patent pools can have challenges getting things done (amusingly recounted here) – like suing infringers that can lead to their demise.  Because Velos owns patents, it faces significantly fewer barriers (e.g. including owners as necessary parties) than other pools if it decides it has no choice but to litigate.

Another reason might be that Unified Patent does not want to interfere with its own undisclosed clients. Ironically, Unified complains about Velos’ “secrecy”, yet is itself notoriously tight-lipped about who its members are. I imagine that many of Velos’ more than 35 licensees insist on secrecy, rather than Velos – since Velos, like most licensors, is more than happy to announce the conclusion of a successful license, as it did recently with Technicolor.  Licensees to patent pools – especially when there are competing pools – are justifiably concerned that publicizing them taking a license will simply make them a good target for other patent owners and pool operators.  Moreover, as a well-known SEP expert noted in response to a rant from Unified’s COO, secrecy requests in licensing discussions are in large measure due to the IPR threat. 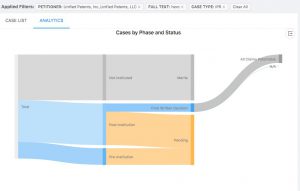 Indeed, Unified’s many IPR filings against HEVC assets attest that this threat is real. Ironically, Unified’s poor performance might now be its best kept secret.  The graphic below, generated from Unified’s own portal, would suggest that the US campaign was a bust.  Unified has been trying to cast Velos as an empty suit, with “nothing behind the curtain.”  From the results so far, it would seem Velos’ patents are in fact pretty strong.  To date, of the 15 US IPRs filed by Unified, 8 were denied institution, 1 had all claims found valid, and the other 6 instituted IPRs remain pending.  Interestingly it is not just with Velos where Unified is failing. As I noted in my prior piece, Unified seems to also have it in for GE’s HEVC patents, and its results are not promising either: of the 4 IPRs filed against GE by Unified, 2 were denied, 1 had all claims found valid, and for the last 1 institution has not been determined. This is significantly worse than the 80%+ success rate than Unified touts.  Indeed, it is worse than the PTO’s own June 2020 statistics (66% institution rate for electrical/computer and around 20% of patents survive unscathed).  None of this is deterring Unified, who filed HEVC IPRs against GE’s fellow HEVC Advance members IP Bridge on May 1, 2020 and ETRI on June 9, 2020. Yet patents which survive Unified’s challenges (so far 9 of the Velos Media portfolio and 3 of the GE) become battle-tested assets, which are then more valuable for litigation purposes.

On the topic of litigation, another landmine for Unified is the Real Party in Interest (RPI) issue, as I noted previously. The time will come, likely soon, when a patent owner sues a Unified member in district court on a patent that was successfully upheld in the face of a Unified IPR. I strongly doubt that a court will bend over backwards to protect the Unified member – who will find themselves estopped from asserting invalidity. Unified’s customers could get a very rude awakening when a court decides that Unified did not provide the anonymous shield that it was intended to create.

Perhaps as a result of its busted US campaign and the RPI threat, Unified has taken its fight to Europe.  On July 17 it filed an opposition with the EPO against a Velos European patent, a member of the same family as one of the few US patents with a pending IPR decision. This seems a bold move – and outside what one might have thought to be Unified’s remit and expertise, inter partes reviews of US patents.  It is odd too, given the historically glacial pace of opposition proceedings (which now seems to be changing).   Perhaps Unified’s new investors are pushing it to broaden its horizons. Whatever the reason, we will soon see if Unified’s lackluster IPR track record will now follow it to European shores.