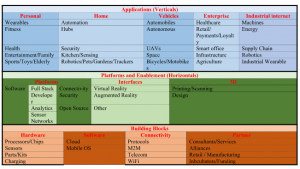 I believe we may be due in the next two to three years for a large-scale re-eruption of the patent wars that have been a constant presence in the telecommunications industry since at least 2005. Unlike the prior iterations of those wars, I believe these wars will not only be international, but much of their driving force will occur ex-USA.  Moreover, they will be across multiple industries. They will be much more impacted by direct government policy and will be much broader in impact than just mobile cell phones and terminals.

I believe that the playing field of this war will be the Internet of Things often abbreviated as IoT.

The belief comes from three things:

Historically, technologies requiring multiple interdependent and backwards compatible components trend toward litigation. This is the case for at least two reasons: how the structure of technical standards can foster litigation and convergence between different industries.

Where technical standards involve patents, and do not require royalty-free licensing, antitrust issues arise quickly. If you think about it, various companies have collaborated, or “colluded” together, to create a technical standard that everyone must use. Once a standard is set, it then becomes very easy for a single patent owner to “hold up” potential implementers of the standard by demanding very high royalties or simply refusing to deal. With roots in mid-twentieth century legal and regulatory responses to the analogous issue of patent pooling, the RAND or FRAND regime was created as a potential solution to this problem by requiring offering licensing on a fair, reasonable and non-discriminatory basis.  Unfortunately, how FRAND operates in practice is not very clear and has been the subject of seemingly endless litigations.

A case in point are the many litigations attempting to define the precise obligation in the intellectual property regime created by standard setting organizations like European Telecommunications Standards Institute (ETSI). ETSI is highly important in this regard as it accounts for 70% of all standard essential patents according to recent studies. Under ETSI’s rules a patent holder’s FRAND obligation is an obligation to be prepared to grant a license to its SEPs on FRAND terms and conditions.

What that means in practice is by no means clear. Even less clear are what obligations, if any, exist on the part of the manufacturer seeking to implement a standard, for example, must they accept a license offer on FRAND terms that is extended by a patent holder? What seems clear, however, is implementers do not have an affirmative obligation to get pre-clearance from SEP holders before manufacturing SEP compliant product. This is very important to understand. Practically speaking, the licensing system set up under ETSI relies on SEP holders who wish to receive royalties actively seeking out manufacturers and offering them licenses on FRAND terms.

Because of the highly complex and multi-faceted nature of technical standards like those promulgated by ETSI, innovative companies tend to have large SEP portfolios. Because patent enforcement is a national right, these portfolios tend to be global. And to ensure as much coverage of the relevant standards as possible, companies often engage in a race to quantity, which in turn increases pressure for royalties to be based — at least in part — on the sheer size of portfolios.

Because the maintenance and annuity fees on large portfolios are very expensive, and portfolios need to be continually refreshed to capture technological change, large patent holders engage in all manners of divestment and trimming exercises that have helped to seed the formation of a robust NPE and privateer ecosystem. Consequently, when disputes arise with larger SEP holders on appropriate licensing of their SEPs, those disputes tend to involve lots of patents in multiple litigations around the world.

When one adds not only business disputes about the price of royalties, but entirely different approaches to licensing IP to the mix, the situation becomes very volatile. Thus, different industries generally have different approaches to resolving business, legal and intellectual property conflict. Of note, two fields key to IoT, telecommunications and IT, have over the past generation had very different approaches to IP conflict. In telecommunications as noted above, companies have been habituated to engaging in exercises resulting in large portfolio licenses. In IT, on the other hand, the dominant attitude was mutually assured destruction. While, for sure, there were plenty of technology licenses, companies did not generally license their patents to each other for profit. Patents were used to crush adversaries in litigation. The clash between these two approaches explains much of the force behind the early rounds of the smartphone wars.

Smartphones are essentially phones with computers. When Apple, Google and Microsoft on the one hand found themselves in the same industry as Nokia, Ericsson, Qualcomm, and Motorola, etc., patent litigation was bound to happen. Now, into the already volatile smartphone mix, comes IoT. IoT is basically a technology based on high speed telecommunications. With it, you can have massive reams of data bouncing around the ether at super-high fast speeds.

Through IoT, every device in the world will be connected through the Internet. Whether it’s your computer, your phone, and traditional electronics; whether it’s your washing machine, your dishwasher, your home entertainment devices, or your home security device; and your sweaters, your shoes, frankly even your pacemaker, or parts of your body.  Some of the early, but under-appreciated use cases include agricultural equipment and logistics and shipping. The preceding incomplete list covers many, many industries that hitherto haven’t competed. That’s to say nothing of the various backbone, infrastructure and equipment industries. The included table provides some illustration of the various industries being roped together through IoT.

Will the IoT Patent Wars be like the Smartphone Wars? Part 2
Scroll to top