Before we continue, it would be good to review what a company’s intangible assets can include. Intangibles can be a company’s brand; its reputation; specific processes and methods to do certain things; employee knowledge that is unique to the company; data collected and analyzed by the company; and many other things. Some of these intangibles can be protected through registered intellectual property (IP) such as patent, trademark or copyright. Others are protected by contract including employee contracts, handbooks, and non-compete agreements.

This article series will cover practical considerations involved in the overall protection of a company’s confidential information including the structuring, drafting, reviewing, and negotiating of general confidentiality agreements in connection with commercial transactions and relationships. Along the way, we will point out special factors relevant to mergers and acquisitions, intellectual property, employment, and litigation. Finally, we will close with an annotated form of NDA. 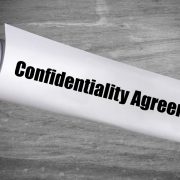 The Value of a Confidentiality Agreement…Continued
0 replies