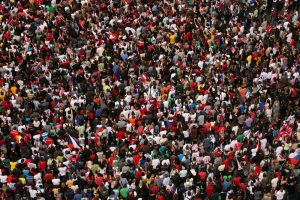 Just tell me how many, they’re all the same

There is no doubt that the number of patents declared as potentially essential to technical standards is not an indication of essentiality; its only purpose is to make those declared patents accessible on FRAND terms should they ever become essential. Tim Pohlman, founder of IPlytics a commercial technology consultancy, participated in an empirical study and report of essential patents commissioned by the European Commission (Tender No ENTR/09/015 (OJEU S136 of 18/07/2009)).  In December 2016 his consultancy, released a 62 page report on SEPs commissioned by the EC.  The report was the result an heroic effort to sort through and normalize patent declaration data for all widely adopted standards (See Fig. 1).  This work was (and is) important and should not be under-valued. It has long been recognized (e.g., n.10), that patent declaration information “can be hard to find, [] the links are often messy, and standards often see improved, updated releases.” On the back of the data the IPlytics team has been collecting about patents declared as potentially essential and 3GPP documents, they have been issuing privately-commissioned reports discussing their data as well as their analysis of the data in greater detail. Their recent reports  on 5G have been widely discussed in the media and at conferences.

Perhaps one of the reasons for this wide discussion, is that the report self-positions itself as a “Fact Finding Study.”  While casual readers of the report may not recognize it, readers attuned to the various issues of contention in the F/RAND wars will quickly notice how the paper is in fact full of implicit and explicit biased policy proposals opposed by many industry players – including its conclusions that new F/RAND licensing rules are required (p42).

Another likely reason behind the buzz generated about IPlytics’ report results from its framing Essential Patents as a “race.” And as such, IPlytics has seemingly recast 5G value as a question of sheer numbers.  The report includes a lot of erroneous and misleading statements on the assumed “strength” and “value” of the portfolios, despite the disclaimer acknowledging that the family statistics from ETSI provides no evidence of relative value or proportion of essentiality of different holders. Moreover, the companies with the most number of patents and applications declared as potentially essential are Chinese, specifically Huawei. The controversy surrounding Huawei combined with the implicit premise of IPlytic’s analysis that Huawei will be one of three or four primary players in rollout of the 5G network likely is what is driving the report’s ubiquity.  While Huawei is probably a well-paying client of IPlytics, listing Huawei as the 5G leader – especially in the midst of the US/China trade war encourages fallacious thinking by confusing volume with value and ‘potentially essential’ with ‘essential’.

This discrepancy has been around for a long time.  As far back as 2005 it was recognized (p5) that “nearly   80%   of   the   patents   declared   essential are probably not essential”.  In principle, this is not a problem, since this data is not used for licensing negotiations. However, these kinds of reports, basing their conclusions in non-reliable data, are likely to mislead the audience. To be fair, IPlytics acknowledges the problem of not having the required data in their 2017 report – spending some 5 pages (p48-52) summarizing some of the more well-known essentiality studies and estimating that a comprehensive essentiality study of 4G would cost 800 million Euros.  Yet, despite listing the concerns on a theoretical level, the report fails to even preliminarily address this issue in their presentation of their patent counts.

Another challenge with patent counting is patent value.  While it may be the fashion (whether court mandated or not) to make each essential patent equal in value to the next, there are any number of studies that attempt to differentiate between them from a technical value perspective.  For example, the IEEE Spectrum has a Patent Power Index.  The results from running their index for telecom can be seen below: 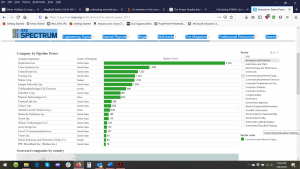 Similar surveys are available from companies like iRunway (2G/3G here), which reviewed patents for their seminal nature based on technical contribution, infringement detectability, technology activity, citation rates, age of patents, and other factors.  Another Article One’s study of US 4G patents which cross-referenced essentiality with an analysis of novelty. 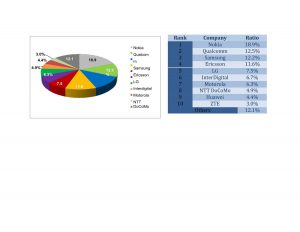 More recent analyses look at the 5G numbers (to be fair, normalized by IPlytics) and apply the essentiality filters used in recent high profile cases, especially, the Unwired Planet case in the UK, that assigned a value to global portfolios: 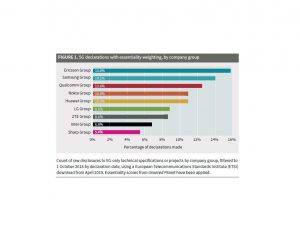 Yet another challenge is validity.  While currently there are no systematic studies of the validity of essential patents, reviews of litigated essential patents offer mixed results.  But generally, the results are poor.  However, it cannot be a mere coincidence that the first patents to be found valid, essential, infringed, and non-design-around-able, in the United Kingdom – a jurisdiction with historically poor validity rates (73% loss rate for patent holders from 2006-12, one of the lowe of all of industrialized countries) – originated from Nokia and Ericsson – two of the pioneers and current leaders in telecommunication innovation, respectively.  As far as some of the other Chinese companies that have recently made headlines for their essential patent portfolios, like ZTE, a recent check of the ETSI IPR database shows that the oldest declaration by ZTE dates from November 2010.  Given that the LTE standard was finalized in 2008, it is not unreasonable to wonder about the validity and value of Chinese essential patents.

There are a few other more particular concerns with the recent IPlytics report.

In my judgment, if a group of comparables are at least potentially as relevant as each other and are not the same, it is not right to elevate a small subset above the others. (…) I am not convinced that (b [the licensee is Huawei, or a similarly situated company such as Samsung), the identity of the licensee, should be a strong factor in determining what comparables are useful for determining the FRAND rate aside from the hard edged non-discrimination point addressed below. FRAND is supposed to eliminate hold up as well as hold out. Different licensees will have differing levels of bargaining power. That is another way of saying their ability to resist hold up and their ability to hold out will vary. It would be unfair (and discriminatory) to assess what is an what is and is not FRAND by reference to this and other characteristics of specific licensees.

In sum, while the IPlytics report is to be praised for normalizing the complex and messy IPR declaration data for patents declared as essential, the report is structured to encourage a focus on patent counting and advocates for a number of highly contested, and in some cases questionable, positions on FRAND under the guise of a (German) government authorized “objective report”.

The Value of a Confidentiality Agreement…Continued