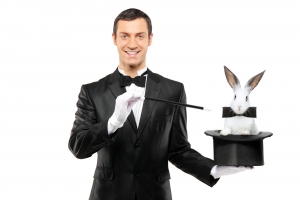 For my next trick, disappearing LOA Disclosures!

I’ve written here before about the broad adverse effects of the 2015 IEEE patent-devaluing policy. In September this year, the U.S. Department of Justice (DOJ) also picked up on these effects in a supplemental business review letter to IEEE, noting the “dampened enthusiasm for the IEEE process”, the significant increase in negative Letters of Assurance (LoAs) and ANSI’s decline to approve IEEE-802.11ah and 802.11ai as American National Standards (ANSs) (see page 9).

Given these setbacks and express challenge by DOJ, one would think that IEEE would drop its one-sided 2015 patent policy and replace it with a balanced one such as those applied by other standards development organizations (SDOs). However, interestingly, it appears that the IEEE staff is pushing for an arrangement that would help the organization conceal negative LOAs from ANSI’s accreditation and approval body.

F/RAND declarations are the cornerstone of open standardization on two independent levels.  First, the declaration (even with negative assurance) provides notice that the declarant holds a patent that may be essential for the standard, appraising implementers and the SDO of the risk of moving forward with the standard with no license assurance. Second, a positive F/RAND assurance ensures all future users of the standards receive access to it. Accordingly, under §3.1 of ANSI’s Essential Requirements, in order to win approval as an ANS, when an American Standards Developer becomes aware that a patent may be essential for its standard, it must obtain a positive F/RAND assurance from the patent holder as a condition for obtaining ANS designation by ANSI. And, as part of the ANS approval process, ANSI requires that – to the extent, LOAs have been submitted – all negative LOAs be submitted to ANSI’s Board of Standards Review (Section 15 of the ANSI form).

But what does an SDO do if it has a persistent negative LOA problem due to a one-sided confiscatory patent policy?  It appears the IEEE staff, in collaboration with ANSI, recently found a creative backdoor solution to this problem – concealment of negative LOAs. A few weeks ago, a well-buried announcement in ANSI’s weekly publication announced ANSI’s decision to reaccredit IEEE under its revised policies that include a questionable March 2020 IEEE Annex containing Procedural Requirements for the Submittal of IEEE Standards to ANSI for Approval as ANSs (page 34).

This Annex is nowhere to be found on the ANSI or IEEE websites, but I got my hands on a copy of it.  As you can see in the Annex’s last paragraph, IEEE secured a special sweetheart deal.  In seeking ANS approval, it would only need to submit negative LOAs to ANSI if the specific patents listed on it are “explicitly stated in the proposed [IEEE standard]”.  If you’re wondering since when do technical standards explicitly state patent numbers in them?  The answer is easy….: “never.”  It’s a hidden agreement that allows IEEE (and IEEE alone) to conceal from ANSI (a) disclosure of patent(s) that may be essential for the standard and (b) the fact that the patent owner expressly declines to provide a F/RAND assurance under the IEEE patent policy, and thus obtain ANS approval for IEEE standards that fail to meet the ANSI Essential Requirements.  A far cry from IEEE’s 2006 and 2015 letters to DOJ supposedly seeking to increase “clarity.”

Perhaps “clarity” is merely the cover story, while the real game is backdoor conspiracy agreements that promote opacity, at the expense of future users of the standard.  ANSI is no less complicit in this “hide the peanut” shenanigan – it essentially modified by stealth its definition in Section 3.1 of the Essential Requirements of “essential patent claim” from “one whose use would be required for compliance with that standard” to one that the standard document itself explicitly identifies.  In colluding with IEEE on this IEEE-only definition, both organizations facilitate the proliferation of standards for which potentially essential patent disclosures are suppressed and the lack of license assurances are concealed.  This prejudices users and the public and exposes them to hidden liability.

One would hope new IEEE and ANSI leadership would put an end to these shenanigans, and restore IEEE’s and ANSI’s integrity and reputation. Such warranted clean up would promote the voluntary consensus standards ecosystem, safeguard its integrity, and benefit humanity.